The ModuLase project aims to develop, validate and demonstrate an adaptable laser process head, capable of welding, cladding and cutting, to increase the flexibility of laser systems. This will be achieved through the use of a Beam Forming Unit (BFU) and modular end-effectors (akin to changing a computer numerical control (CNC) machining tool). The project will focus on materials and geometries for high value manufacturing applications in the power, automotive and aerospace sectors. The ModuLase system will also include intelligent sensor technologies to support adaptive process control and quality assurance. 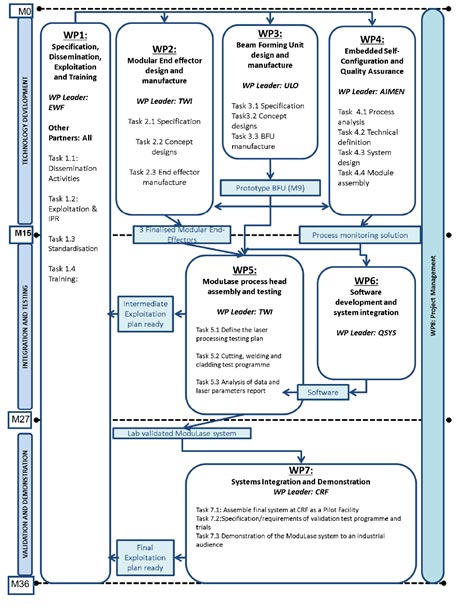 BACKGROUND OF THE PROJECT

As an industrial manufacturing technology, laser-based production processes are widely accepted by a number of industry sectors; including the automotive, aerospace, medical, and electronics sectors. The driver behind this acceptance is because of the technical advantages offered by laser-based production processes. These are principally related to the inherent nature of laser beams, in that they can be focussed into a high intensity low divergence power beam, which can then be manipulated using transmissive or reflective optics.

In the laser welding process, the laser beam is focused on, or just inside, the material surface. The focused laser beam melts and vaporises the material to be welded. A high-aspect ratio vapour cavity (or keyhole) is formed in the workpiece, which enables high penetration depths to be achieved with a relatively low heat-input. The laser beam may either be released at the same point on the workpiece for a pre-determined amount of time to form a spot weld, or traversed through the workpiece to form a weld seam.

Laser cladding systems, in one form or another, have already existed for several decades. These have become established for simpler surface coating applications, to give low dilution, low heat input, corrosion or wear resistant finishes (example right), most commonly melting wire, or powder introduced from the cladding head in to the vicinity of the beam-material interaction point. Normally, a single composition of consumable is used, with occasional use of injected oxide or ceramic particles to enhance strength or wear properties. More recently, the value of these technologies for rapid additive manufacture has been recognised, and a variety of different gantry- and robot-manipulated laser-based materials deposition systems now exist, including those using pre-placed powder. These are capable of the manufacture of prototype parts, or special additions on to precursor parts (e.g. forgings, example above), sometimes with Computer-aided design (CAD)/ Computer-aided manufacturing (CAM) assistance.

In the laser cutting process, the laser beam is focused on, or just inside the material surface, through a cutting nozzle aligned coaxially with the beam. The focused laser beam melts and vaporises the material to be cut and an assist gas (dispensed through the nozzle) is used to flush away the molten material. This forms a narrow channel, with a thin molten exterior, which propagates along the cutting direction, by either traversing the cutting head or the material.

The novelty of the ModuLase adaptable laser processing head, comprising a BFU and end-effectors, is that numerous laser based processes can be completed without the lengthy downtime associated from changing optical components. When changing conventional optical components, much care must be taken to avoid contamination from dust and air particulates, preferably undertaking the activity in a clean room environment. An optical changeover can take over 2 hours for the cleanliness of the optics to be delivered with confidence. The BFU in the ModuLase solution is the step change in head design that the laser processing industry needs and that can result in changing the beam dimension in a matter of seconds, rather than hours.